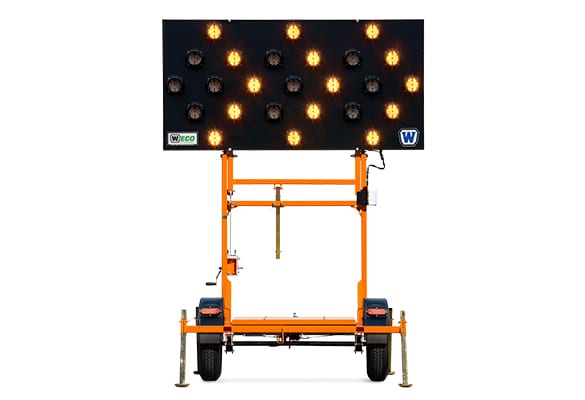 Motorway maintenance was still in its infancy in those days and was merely treated by the county council – through its agency agreement with the Department for  Transport (DfT) – as just another dual carriageway highway. The vehicle and safety equipment used were standard county council issue, and hence substandard for the speed and volume of traffic rapidly building across the strategic network.

To improve safety for both worker and user of the strategic network, I looked to the USA for guidance and for supply of more suitable equipment as they already had a head start on us. Initially I procured and trialled a sequential arrow (see photo), which was trailer mounted and towed behind the protecting vehicle at the rear of the works.

For its time it was quite novel, flashed brightly and was distinctive, but did not conform to Traffic Signs Regulations and General Directions (TSRGD) as it indicated turn left (or right) ahead instead of keep left or right in order to execute a lane change. The non-conformance with TSRGD was frowned upon by the DfT and the move to standard 610 arrow mounted on a yellow board with amber flashing lights at each corner was deemed appropriate. The workforce at Weatherhill Depot soon constructed suitable signs for the three-tonne vehicles, which were then equipped with portable generators to power the lighting as batteries were not sufficient for sustained operation.

This was a major step forward, but it was soon obvious that, when operating, the rear of these vehicles was vulnerable to impact from errant vehicles.

Looking towards the USA again, the use of crash cushions or ‘attenuators’ as they are known in the States came to my rescue. Highway Care (a UK based safety company) had an import licence with the USA to bring them to the UK and I was able to obtain a suitable supply in order to retrofit all the vehicles used in the convoy.

This allowed us to achieve one of the first successful ‘Mobile Lane Closures’ (MLC’s) in the UK although there were other organisations working on similar solutions at that time.

The next development was the ability to adjust the intensity of the amber warning lamps to enable the transition from daytime working into night-time working.

Although this adjustment was possible and also seen as necessary, no criteria existed for its use by the DfT through any of the published documentation at that time. In fact, I was reminded of this by the Highways Agency area engineer, who demanded that we stopped night work forthwith after being briefed at his regular liaison meeting.

In my role of operations manager for Surrey CC’s new formed Motorway and Trunk Road, I responded that ‘the intervention levels for roadworks in a live lane on the M25 did not permit daytime working and therefore night-time was the only option’, further stating that ‘he either let me work by night or we stop working’, and asked: ‘Which do want?’

After given the matter some consideration, the area engineer issued an order to the Transport Research Laboratory (now TRL) at Crowthorne supported by funding for them to trial and draft a suitable Technical Advice Note. This allowed me to provide the vehicles and as well as provide a suitable trial site as their test bed.

The result is very much what we have in place today in Chapter 8 for MLC’s, which have become the norm for every working day or night!