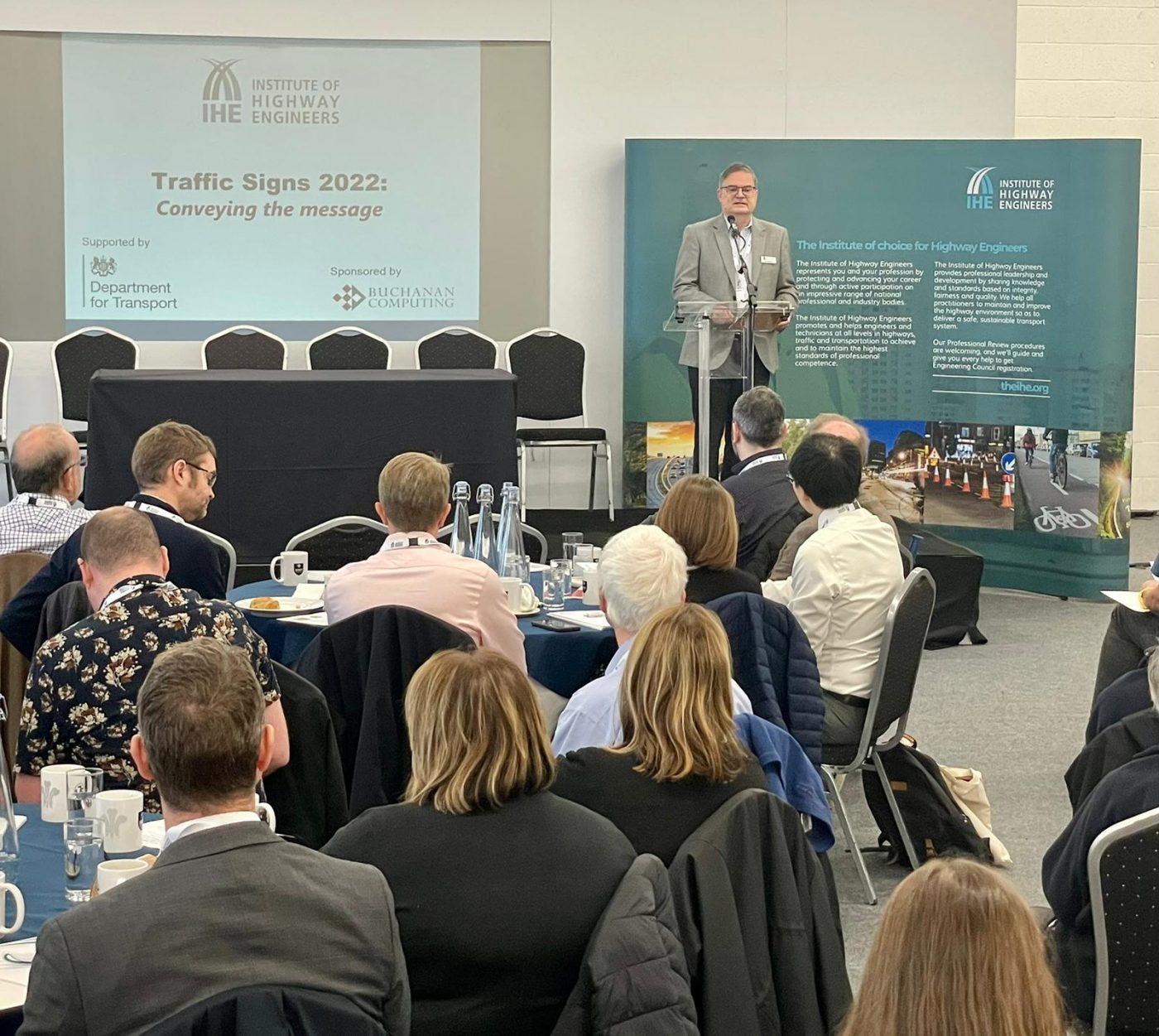 More than one hundred people gathered at the Kia Oval in November for the IHE Annual Signs Conference. Twelve excellent speakers covered a wide variety of topics, fully justifying the event’s subtitle: ‘Conveying the Message’.

The event was supported by the Department for Transport (DfT), as it has been since its inauguration in 1993, and department’s speakers started the proceedings. John Bennett gave an honest and open summary of the responses to the policy implementation review of the 2016 signs regulations, known as TSRGD. The good points were that money was being saved on the reduced need for electrical lighting of signs, fewer signs needed to go
to DfT for authorisation and the ‘building block’ approach for some signs was helpful. But sign clutter still appeared to be growing and some respondents felt that the revised TSRGD format was not easy to use and that it made mistakes more likely.

Sally Gibbons, head of traffic signs and street design policy at DfT, gave two presentations, firstly on how advice on signing was being incorporated into the new edition of Manual for Streets, and later on the miscellany of other projects in her team.  These included producing revised guidance on keeping buses moving, how to implement ‘school streets’, and advice for authorities  relating to the Traffic Management Act, both with regard to their network management duty and the implementation of civil moving traffic enforcement. Her themes encompassed linking signing to urban design and focusing on the movement of people: not just ‘boxes’.

Representing the Welsh Government, Gwion ap Rhisiart spoke on the innovative change in the default speed limit to 20mph in street-lit areas that will occur in Wales in September 2023 and how it is being implemented. He brought a 30mph speed limit sign and showed how the top layer could be peeled off to reveal ‘20’.  One of the main themes of the day was the roll-out of civil moving traffic enforcement throughout England. Rob Shoebridge of Derby City  Council, the first authority to make use of these new powers, kicked this off. He covered the six ‘school safe haven’ zones that were being enforced, as well no entry points and a banned turn. He noted that years of their bad habits being unchallenged led many motorists to be unsure of the restrictions. Peter Bell of Lancashire County Council followed with a discussion on achieving the right balance between avoiding sign clutter and providing ‘adequate information’.

As Mr Bell had referred to adjudications that the council lost, it was good to hear immediately from Annie Hockaday, a Traffic  Penalty Tribunal adjudicator. She illustrated both good signing and cases where it was too
complex. She pointed out that the signing for bus gates introduced six years ago caused confusion because it is still not in the Highway Code or the DfT booklet Know Your Traffic Signs, and that adjudicators need to see the driver’s eye view, as well as evidence from cameras that are often positioned high up.

Robert McGregor of Aberdeenshire Council started the afternoon with an interesting look at the signing and route hierarchy challenges of the Aberdeen Bypass, a scheme first mooted in 1952, but only recently fully opened. TfL speakers Lixi Pan and Claire Harrison talked of the issues that arose from the expansion of the London ULEZ in October 2021, and the regulatory and advance signing it needed. This experience is pertinent to the many other clean air schemes being introduced around the country. Claire Scriven  of East Sussex CC raised the very interesting relationship between safety auditing and how it can help to avoid poor signing. To round off the day, Andy Sturrock reminded delegates of the need for temporary signs to be compliant with TSRGD, and Andy Pledge of Passive Safety UK showed videos of recent crash tests of passively safe sign supports, including one mounted behind a crash  barrier within its working width that still performed satisfactorily.

Simon Morgan, who chaired the day, reminded everyone that IHE offers a Professional Certificate in Traffic Signing and Road Marking, which the DfT says in the Traffic Signs Manual should be held by those  who design or check major traffic signing work. Many of the day’s speakers have this accreditation. Buchanan Computing was thanked for sponsoring and helping organise the event.