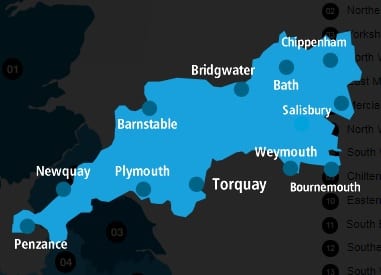 The South Western Branch recently held its 57th AGM, and for the third year running this was held as an online event. At the AGM Andy Brown (BCP Council) stood down as branch chair and the role was taken up by Julie Watts (also BCP Council), who was installed as chair for the next two years, while on a diving holiday in Egypt…the marvels of modern technology!

After serving a number of years as branch secretary, Helen Pickett also stood down and the office was taken up by Christopher Jenner. Meanwhile Helen continues her dedication to the branch and has been elected as vice-chairman. Stephen Webb agreed to remain branch treasurer. Oliver Dash from Exeter also joined the branch committee.

With virtual committee meetings continuing in the branch, Julie Watts will be arranging an online committee meeting in the coming weeks to create a way forward for the newly formed committee. The coming year will include a ‘face  to face’ branch health and safety day at branch sponsor WJ’s offices at Wellington, Somerset, with much more to follow.

During the last year the branch organised a number of online lunchtime webinar events that remain very popular. The first of these was another excellent WJ webinar held on 1 July last year entitled ‘Materials, Products and Standards – High friction surfacing/coloured surfacing/crack and joint sealing and more’. This was the third of a series that started earlier in 2021, which had been arranged by the Andy Brown.

On 11 November 2021, there as a virtual ‘teams’ visit to Forder Valley Link Road in Plymouth when Katy Toms of WSP was the speaker, as arranged by Den Symons. On 17 March 2022, Andy Brown organised the South Western Branch Spring Webinar with Alistair Gollop of Mott MacDonald promoting The IHE Passive Safety Electrical Guide. Finally, Julie Watts organised a webinar on 12 May entitled ‘Women’s Personal Safety on Public Transport’, which was presented by Susan Leadbetter from WSP.

All these online events, including the recent AGM, can be found on the IHE website in the CPD hub in the Members’ Area, along with other IHE webinars.

The  ranch’s AGM concluded with outgoing IHE President Stephen Webb giving a report on his time as President and the institute’s future plans. The branch was pleased to note that Andy Brown is  one of three new members from South Western Branch joining the IHE Council at this year’s IHE AGM, and he will be joined by Simon White and Rebecca Bollen.

The South Western Branch Committee looks forward to meeting its members at Wellington in the autumn or at other branch events in the coming year.