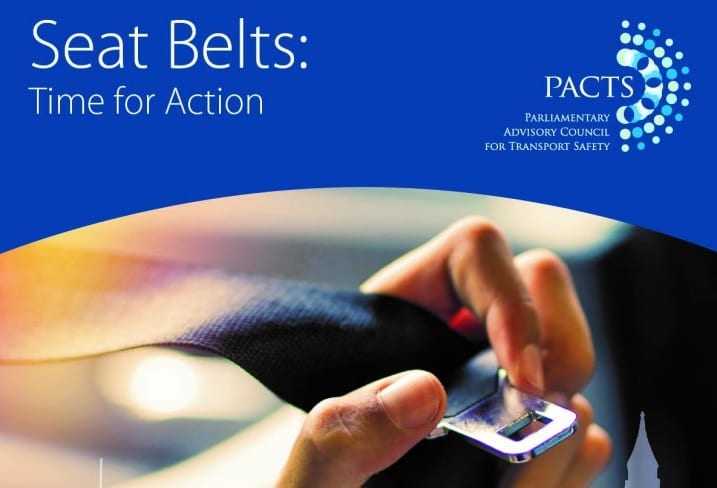 PACTS have published a new report on 13th March 2020 on ‘Seat Belts – Time for Action.’ The report analysed PFCI data on seat belt usage and found that 31% of those who died when a seat belt was legally required were not wearing one.

“Seat Belts: Time for Action uses data obtained from specialist Police Forensic Collision Investigators (PFCIs) by using the Freedom of Information Act. The analysis suggests that the number of fatalities could be higher than official figures (26% in 2018), published by the Department for Transport. The report is based on over 1,000 records obtained from PFCIs. It suggests that there were 261 deaths where a seat belt was legally required but not worn in 2018 in Great Britain (and 273 in the UK). The report also shows that seat belt status was known in 85% of fatalities where PFCI data was available compared to around 50% in Stats19 reports.

“PFCI data differs to Stats19 because it is recorded by highly trained police officers and police staff specialising in fatal and serious injury collision investigation who are given more time to complete their reports, meeting a higher standard of evidence which is recognised by the courts. In contrast, Stats19 data is usually collected by response officers at the scene, by phone or online with some data based on reports by the public at a Police station, and is generally filled out before the end of a shift. And while Stats19 data records road injury collisions in Great Britain, PFCI data also includes data from Northern Ireland.

“The report is a follow up to the 2019 PACTS report on seat belts, Seat Belts: The Forgotten Road Safety Priority . It reiterates the recommendations of the previous report and adds to its statistical analysis through the use of PFCI data.”

A full copy of the report can be viewed here.