IHE faces change at the top 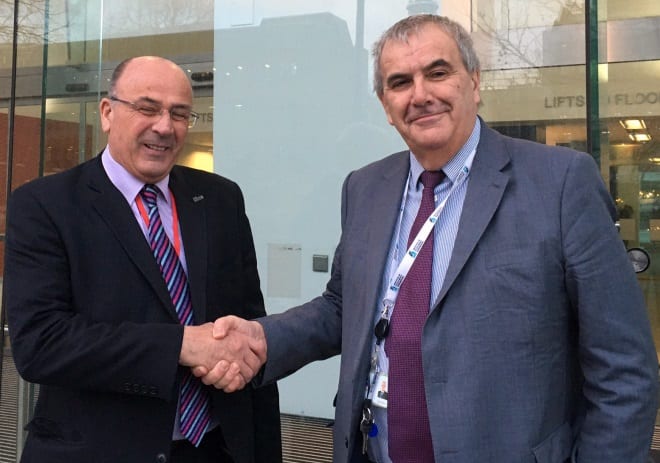 After five years as chief executive of the Institute of Highway Engineers (IHE) Richard Hayes is handing over to Steve Spender, another of the institution’s stalwarts. Dominic Browne speaks to these old friends about another chapter in a story that shapes the sector.

Richard Hayes and Steve Spender have known each other for many years, and in each other’s company, they seem like old school friends. A back-at-school camaraderie bounces between them: ‘See, I always was taller than you,’ – says Mr Hayes when posing for photos.

They came up in the ranks of the IHE together, held presidential positions together, and helped reshape the IHE mould after 2010. They are like-minded people, and it is their shared love of the IHE that makes this most apparent.

Mr Spender says: ‘The IHE courses and training are about adding value. Providing something people can take back to the office that is practical, useful and resilient over a long time. We want people to use our courses.’

Together they helped organise and deliver ‘a refresh and reset’ of the IHE between 2010 and 2011 which saw its transition from simply being a learned institute ‘to a modern professional, career organisation run by members for members’.

‘Richard was senior vice president at the time I was president. We went through the shake-up together. I now want to continue the work Richard has done,’ Mr Spender says.

The numbers tell the story of how successful a transition this has been. In 2010, the institute had around 2,700 registered members; last year it had risen to 3,700. It also saw a turnaround from a low ebb in terms of course attendance to its best-ever last year.

Mr Spender is currently director of HETC Associates and was previously head of highways for Hampshire County Council. He spent over 30 years working in local government and held the post of IHE president from 2010 to 2012. He has also served on the IHE’s Council for several years as well as numerous national and regional boards in the sector.

The IHE ‘is in my blood’ he says, and while he is keen to take on the chief executive’s role, he is quick to add that Mr Hayes is not leaving the institute or the sector any time soon.

‘Richard is and will remain an integral part of the IHE, with a wealth of experience and passion and drive for the IHE.

‘The focus on continuity is not just about policy but also the nature of the organisation’, Mr Spender says.

‘We have established a reputation. If we were to become a much bigger institute, we may lose the unique benefits we have with the ability to change quickly to reflect the needs of our members.
Over the last 10 years our voice has changed. We have become more relevant, respected and listened to. We are regularly involved in discussion with the Department for Transport and are sponsors of the All-Party Parliamentary Group (APPG) for Highways [now the APPG for Better Roads].

‘We have found our niche in our market. It has taken a lot of hard work from us, and in particular Richard, and we need to build on that.’

There are ambitious plans for change, but they are based on an expansion of the current efforts. Principally, the IHE wants to cement its position as a ‘linchpin’ of the highways sector.

It has already been asked to carry out administrative duties for the National Winter Service Research Group, after previously helping with its post-Appendix H Practical Guide.

And following previous instances where its work on guidance and policy has been, shall we say, repeated elsewhere in the sector, the IHE wants to widen its collaborative remit and help establish a sector-wide highways forum.

Such a national forum would be more informal than the UK Roads Liaison Group, but it could prevent the duplication of work, and encourage more efficient use of resources. Some informal conversations been held with Tier One companies.

Mr Spender says: ‘I hope we could lead a national forum and we have had some good responses from others who want to be a part of that. Such a national forum could start as a discussion programme with key players, which could then be expanded and more established.’

Another key ambition is to develop its relationship with Tier Two and Three contractors. Mr Spender points out: ‘With outsourcing increasing, many clients expect the supply chain to provide a list of personnel with professional qualifications that match their own.’

These plans form part of the broader ambition to boost membership in the private sector. An ambition that Mr Hayes has helped build a platform to achieve.

He says: ‘Our training has become an industry standard in many cases. It allows people to gain evidence to help achieve a professional qualification. It provides a framework that can help create a technical report on an individual’s experience.

‘We have help create standards that can be recognised, for instance for highway inspectors who can now demonstrate their competencies and expertise in court.

Mr Hayes has a lingering regret that he could not push the training into a more academic space. On the other hand, he created a professional qualification based on experience in the field – ‘a time-served engineer’ via the Experiential Route towards CEng – which is something he should be proud of, and the sector should be grateful for.

Mr Spender says: ‘I had 30 years of experience and the Experiential Route allowed me to demonstrate that I had the same level of knowledge as a degree graduate when I went for CEng. It was Richard who helped make that possible by helping develop the route.’

This development is especially crucial to the highways sector as Mr Spender and Mr Hayes estimate that only a handful of universities these days have specific highways elements in their engineering studies.

Mr Hayes completes his current contract in March and says he hopes he has left the IHE in a stronger position than he found it. With the IHE having grown in numbers and influence, become the leading professional body in training across the highways discipline, and responsible for national guidance through its Well Managed Highway Liability Risk document, no one can doubt it.

He will now help in more of a consultancy and training role and remains as committed to maintaining the sector’s progress as ever.

When he looks at the new Government, he sees little hope that more cash will come to local roads: ‘It all generally tends to go to Highways England.’ However, he is encouraged by the increasing realisation in political circles that the country needs a more continuous career-spanning route to education and training. In the modern economy, ideas like a skills allowance that could follow you through your career are becoming more and more critical.

There aren’t many people in our sector who have more knowledge of the highways network than Mr Hayes, but more importantly, there can be almost no one who has spent so much time passing this knowledge on.

He has educated and inspired thousands of professionals across all levels through his wider training, writing and always popular conference speeches.

As a legacy for Mr Spender to build on, Euston Tower in London, home of the IHE it doesn’t come much better than that.