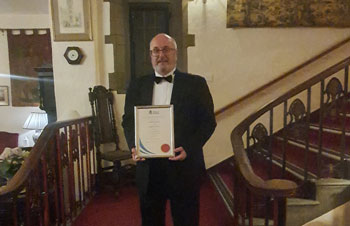 The IHE is pleased to announce that the newest Honorary Fellow of the Institute is Andrew Sturrock IEng HonFIHE. Initially joining the Institute of Works and Highways Technician Engineers (IWHTE) in 1979/1980, Andrew went on to complete his City and Guilds Highway Technician Certificate course and become registered as an engineering technician. When the IHIE was officially formed in 1990 he became registered as an incorporated engineer and has remained in the Institute ever since.

Andrew has been a very active member of the IHE Traffic Signs Panel and has been a central contributor to much of what IHE has submitted to the Department for Transport over many years.

Matthew Youell of National Highways said: ‘Andy Sturrock has been instrumental in helping to improve TTM and sign design, policy and application, and has been assisting in devising the new wicket signs, helped to draft TSRGD as well as help write large bits of Chapter 8 Part 3.

‘Despite having formally retired last year, Andy has continued to provide support and advice in finalising the draft publications.’

On awarding the Honorary Fellowship to Andrew, President Martin Polland said: ‘Andrew is not just a TTM specialist with input into permanent sign design, but also a practitioner and provider of best practice guidance and help. He should be congratulated for his hard work and dedication to not only the IHE but also to the highways sector as a whole and is a worthy recipient of an Honorary Fellowship.’

On receiving his award, Andrew said: ‘It is a great honorary to be nominated for an Honorary Fellowship and I would like to thank all of this those involved in supporting my nomination for such a prestigious award.’