Jonathan Pearson CEng FIHE works for Ringway Jacobs as Head of Programme Management within the ‘Essex Highways’ Integrated Partnership, which delivers a wide range of highway services on behalf of Essex County Council.

Since then his career progressed within local government at Norfolk, Lincolnshire and Cambridgeshire County Councils – in a range of operational and strategic roles. In 2015 Jonathan joined Tarmac to lead on Programming activities through Norfolk CC’s Highways Contract – before moving to Ringway Jacobs in the Autumn of 2016.

Jonathan became a member of the IHE in 2003 before becoming an Incorporated Engineer and Fellow in 2006. Following completion of an MSc in Civil Engineering in 2008 he achieved Chartered status in 2010. He has served on the IHE Council since June 2010 and was the Portfolio Lead for the Membership and Qualifications Group until 2016.  He also conducts Professional Reviews on behalf of the Institute.

Stephen began his career in 1988 and then spent 13 years working mainly in the waste water and flood alleviation engineering sector for both Montgomery Watson and Babtie Group (now Jacobs). During this
time Stephen was part of project engineering teams which introduced either new or upgraded waste water treatment works which in turn improved bathing water quality around the coastline of Devon and
Cornwall. Stephen’s ‘highway’ career then took off in Atkins’ traffic engineering/road safety team in Somerset County Council offices as part of a collaborative consultancy services ‘white collar’ Contract.

Stephen has nearly 16 years’ experience of working with highway clients such as Somerset County Council and thrives on delivering local projects which in turn serve to benefit the community, whether it is in reducing injury collisions on the road or providing safer facilities for the varying user groups such as cycling/walking schemes or crossing facilities and / or traffic calming schemes.

In 2010 Stephen joined Parsons Brinckerhoff as part of the TUPE process and one of his first tasks was to be part of the PB Project Team working on behalf of Highways England, responsible for updating the DMRB Road Safety Audit Standard to version HD 19/15. This also included for introducing the Road Safety Auditor Certificate of Competency process (IAN 152/11).

Stephen worked in Abu Dhabi, UAE in late 2010 through to 2011 mainly undertaking road safety audit on the local highway network in the municipality of Al Ain. This also included reviewing the road worker safety procedures within the Abu Dhabi Emirate.

Stephen joined the IHE in 2007 before becoming an Incorporated Engineer and Fellow that same year. He has served on IHE’s Council since June 2011 and has been the Portfolio Lead for the Professional Development Group since February 2014, whilst also conducting the role of Treasurer for the IHE South Western Branch since 2008.

Stephen is a keen cyclist and, along with his brother, recently visited the French Alps to watch the Tour de France. He also tackled some of the many famous climbs such as Alpe d’Huez, Col du Chaussy and Les Lacets de Montvernier, Col du Granon and Col de l’Izoard. His enthusiasm for cycling has supported him during the delivery of numerous cycling schemes in his local community.

IHE Junior Vice President, Martin Polland CEng FIHE, works for South Lanarkshire Council as Roads Area Manager covering the Clydesdale area. He is responsible for managing  the day to day delivery of the Councils resurfacing programme, manages the Street Works team,  is lead for winter maintenance within the Council and also is responsible for the Council’s road asset management plan.

Martin started his career in the Utility business and worked for 10 years with various contractors delivering gas, water and cable television projects throughout the UK.

Since then his career has progressed within local government. He has worked for Lothian Regional Council, West Lothian Council and now with South Lanarkshire Council in a range of roles. In April 2012 Martin became roads area manager and continues today with this role. He is current co-chair of Roads and Utilities Committee Scotland (Raucs), sits on the policy development group in Scotland looking at road works policy and is also currently project manager for the Scottish roads research board looking into tar bound arisings.

He joined the IHE in 1998 and until April of this year was chair of the IHE Scotland branch for some 8 years. He gained his IEng qualification in 2009 and also achieved Chartered status in December 2015. He has served on IHE Council since 2016 and regularly undertakes reviews for the Institute.

Martin is a keen walker, hill walker and also coaches youth football in his spare time. 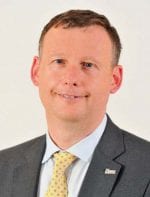 Local Transport Projects Ltd was established in 2004 and work throughout the UK, assisting private sector clients with planning issues and public sector clients through a range of multi-disciplinary frameworks.

Tony has been a Fellow of the Institute since 1998 since becoming incorporated, and has served on Council since June 2008. He started his highways career in 1988 with an indentured training scheme and has worked within both the public and private sector.

Tony gained an MSc in European Traffic & Transportation in 2004, and is a registered road safety auditor. Tony serves on the Institute’s Road Safety and Cycling Infrastructure panels, attends All Party Parliamentary Group meetings and represents the IHE on the CIHT/DfT shared streets advisory group.

Tony was instrumental in the establishment of the current Portfolio Group structure and is committed to raising the profile of the Institute and providing effective, quality services for members.

He is a keen Hull City AFC fan and enjoys playing football, cricket and can often be found cycling on the quiet lanes and muddy trails within the East Riding.